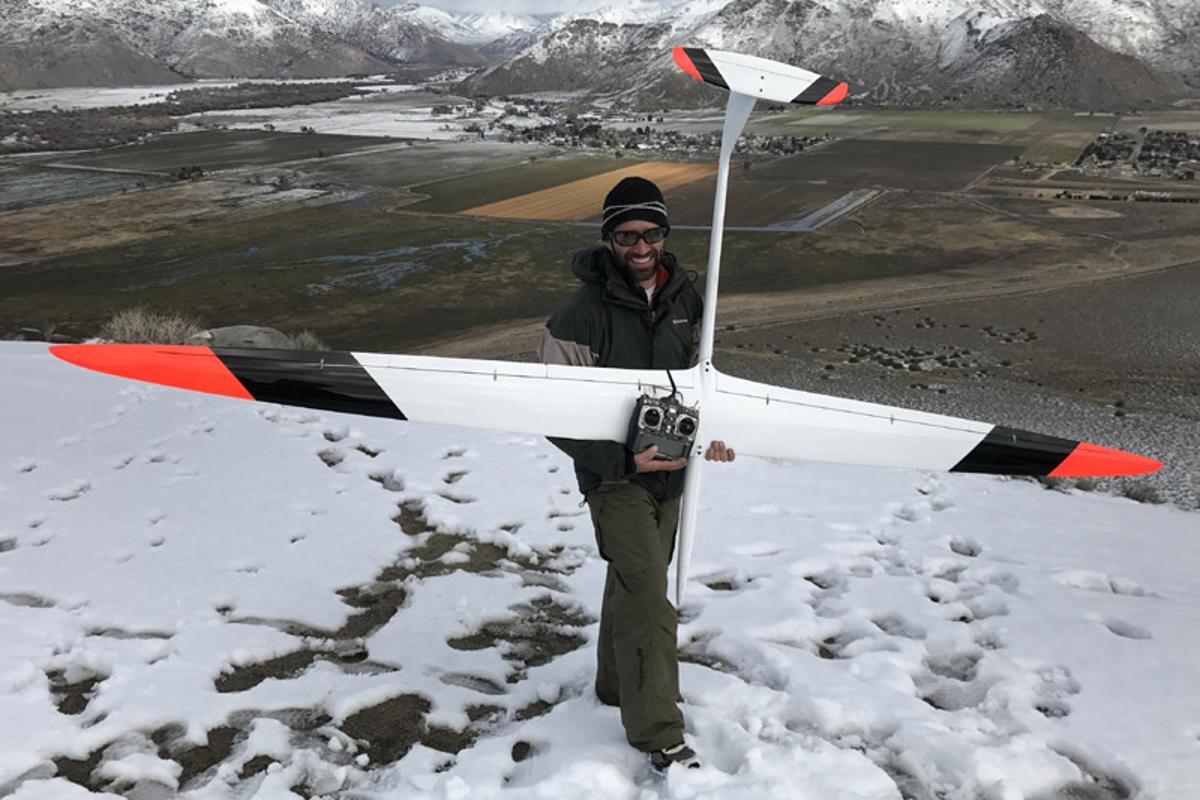 No props, no jets, no rockets – California's Spencer Lisenby just broke the world speed record for remote controlled aircraft, taking an unpowered RC glider transonic at 548 mph (882 km/h) using nothing but the wind. Well, that and an incredible degree of skill in a highly dangerous technique called dynamic soaring. And while it's more or less an extreme hobby at the moment, he's got some very interesting plans for the technique and the technology behind it.

Wind accelerates like mad when it goes up a hill, and since the 1960s, "slope soaring" radio-controlled glider pilots have used that reliable source of energy to keep their aircraft flying pretty much indefinitely – as long as they take care to avoid the wild, plane-eating turbulence of the "shear layer" on the leeward side behind the hill where that fast-moving air begins interacting with the much slower air shielded behind the ridge.

But in the last 20 years, a group of intrepid RC glider fanatics has been experimenting and perfecting the art of plunging through that shear layer in a loop, using the extreme push of high winds to accelerate the gliders on the way down, and the still air under the shear layer as a way of returning most of the way upward without losing energy flying into a crazy headwind. The aircraft gains roughly the speed of the tailwind every time it goes down, and loses much less on the way back up, picking up energy and speed on every loop.

Not that these hobbyists invented the technique; the black-footed albatross has been using exactly this flight pattern for millennia, harnessing the wind speed differentials created by ocean swells to traverse long distances, in any direction, without expending any energy.

"I've even read that they can perform this maneuver in their sleep," Lisenby told an audience at the TNG Technology Tech Day back in 2017, "with their wing tip mere centimeters from moving water. We all aspire to the skills of the albatross. But they're usually trying to go somewhere. We're going for speed."

Dynamic soaring, or DS, might sound innocent enough as a title, but these extraordinary pilots are now taking unpowered gliders up to transonic speeds, perilously close to the ground. Continue tuning and optimizing that tilted loop between the high and low air speeds, and the glider gets faster and faster, until either the pilot messes up the loop, the aircraft disintegrates spectacularly under extreme G-loading or flutter stresses, or you reach an airspeed where drag finally limits your ability to go faster. 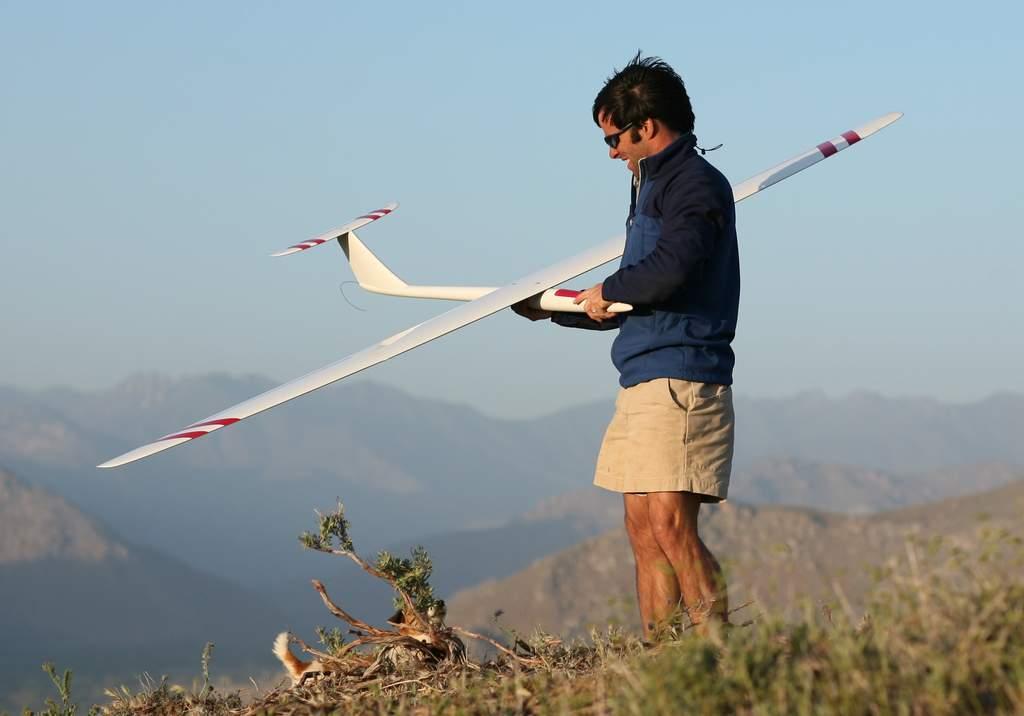 Lisenby is not just your average hobby flyer. He's absolutely obsessed with DS, and in addition to holding a swag of world records as a pilot, he's also a pioneering glider designer. Indeed, as a prototype designer at DSKinetic, he designs and develops all the huge gliders he flies, in conjunction with a local team, German aerodynamics experts and the University of Stuttgart.

Nothing off the shelf could come close to handling the constant 60-80 G-loadings these things experience, with spikes as high as 120 g as they whip around in their impossibly fast oval loops through turbulent air. For context, Formula One cars develop up to 6 g in the corners, and people tend to start passing out at around 8-9 g as the acceleration literally drains the blood from their brains.

The glider that just set the record is a 130-inch (3.3-m) DSKinetic Transonic DP, a taper-winged, heavily reinforced carbon beast with a design honed over many years to fly as fast as possible in dynamic soaring patterns without introducing the weird flight dynamics of swept wings. Theoretically, Lisenby says it should be capable of reaching 580 mph (933 km/h) in its current form.
more...

Abstract:
Most people wouldn't imagine that the world's fastest radio controlled airplane has no propeller, jet, or any source of propulsion on board. Dynamic Soaring is a unique method of soaring which has enabled radio controlled gliders to achieve speeds in excess of 835kph. We will explore the fundamentals and progress of dynamic soaring and examine the challenges associated with designing, building, and flying an un-powered model airplane at speeds comparable to modern passenger jets. We will also give some thought to practical applications of dynamic soaring and discuss where it could be applied in the future.

Right Up Our Alley

DIY-HP-LED said:
Right Up Our Alley

These and custom built autonomous drones were my thing of late. Had them all in video. Check out 3d flying. Drones can't hang. Inverted and moderate tricks are the best in my tricks level.

DIY-HP-LED said:
Right Up Our Alley

Here's a decent video of a monster heli indoors. Still 2 sizes from largest. And micro CP's you can't follow with your eyes.

The FAA just set dates for when its tightened drone rules will take effect, and some measures will kick in sooner than others. The regulator has revealed that Remote ID and Operations Over People rules will start taking effect as of April 21st, 2021. From then on, you'll have to list the serial number of any Remote ID drone or add-on module in your registration. You can fly small (under 0.55lbs) drones over people if they have protected blades, but you can't conduct sustained flight over open-air assemblies unless you comply with Remote ID.

Other, heavier drones have stricter operational and performance requirements, such as limits on the amount of force they'd deliver in a crash. Category 3 drones (those that deliver no more than 25 foot-pounds of energy) can't fly over assemblies regardless of Remote ID, and can't fly over people unless they're in a restricted area and know about possible drone flights. Category 4 drones above that limit need airworthiness certificates, maintenance and inspections.

There is some breathing room, however. Drone makers have to comply with Remote ID requirements starting September 16th, 2022, while all pilots will have to meet Remote ID requirements (or fly within limitations) a year later on September 16th, 2023. These windows are six months shorter than originally planned, but give time for both operators and drone producers time to adapt.

The final rules won't please everyone. Alphabet's drone delivery company Wing has worried about privacy, noting that broadcast Remote IDs could let people infer sensitive data like home addresses. Wing also worried the broadcasts could make it hard to establish drone traffic control systems. Still, the changes are coming — and the dates at least help everyone plan their next steps.

And hence the terror of the perps in power. LOL. Set it and forget it at 234mph. LMAO. And I build them for fun with scraps.

Best wishes. Glad you are well. Peace. And I'm flying my egg crates and hamburger trays in protest of oppressive ludicrous rules.

The American space agency has successfully flown a small helicopter on Mars.

The drone, called Ingenuity, was airborne for less than a minute, but Nasa is celebrating what represents the first powered, controlled flight by an aircraft on another world.

Confirmation came via a satellite at Mars which relayed the chopper's data back to Earth.
The space agency is promising more adventurous flights in the days ahead.

The rotocraft was carried to Mars in the belly of Nasa's Perseverance Rover, which touched down in Jezero Crater on the Red Planet in February.

Ingenuity will be commanded to fly higher and further as engineers seek to test the limits of the technology.

The effective date was delayed about a month during the change in administration. The FAA said its long-awaited rules for the drones, also known as unmanned aerial vehicles, will address security concerns by requiring remote identification technology in most cases to enable their identification from the ground.

U.S. Transportation Secretary Pete Buttigieg said Wednesday the rules "are an important first step in safely and securely managing the growing use of drones in our airspace, though more work remains on the journey to full integration" of drones.

Drone manufacturers have 18 months to begin producing drones with Remote ID, and operators will have an additional year to provide Remote ID.

Companies have been racing to create drone fleets to speed deliveries. As of December, the United States had over 1.7 million drone registrations and 203,000 FAA-certificated remote pilots.

For at-night operations, the FAA said drones must be equipped with anti-collision lights. The final rules allow operations over moving vehicles in some circumstances.

The new rules eliminate requirements that drones be connected to the internet to transmit location data but do require that they broadcast remote ID messages via radio frequency broadcast.

One change, since the rules were first proposed in 2019, requires that small drones not have any exposed rotating parts that would lacerate human skin.

If you fly hard and break your DJI FPV drone, you cannot repair it yourself, but must ship it to DJI and they will fix it for you, for a price. You can get the digital camera system and goggles to use with regular FPV drones and planes however, so the high quality experience remains the same. This has become the high end of the FPV world now a days and will cause the price of good analog systems and components to drop. Many professional FPV pilots have switched to digital systems since the image quality in their goggles is very important for racing and freestyle, as well as cinematic work.

The long awaited (but not a surprise) DJI FPV Drone is finally here. My full review after months of use.
Last edited: Apr 25, 2021

When is Kroger going blame them in Ohio. And have you seen Amacon's Blimp of an aircraft carrier? I'm getting worried. As my flying stick of butter is threat to humanity and airspace. LOL.

MICHI-CAN said:
When is Kroger going blame them in Ohio. And have you seen Amacon's Blimp of an aircraft carrier? I'm getting worried. As my flying stick of butter is threat to humanity and airspace. LOL.
Click to expand...

I'd systems are coming, anybody can point a camera at your plane or drone and bust you, the laws are so overbearing you can always be busted for something too. It's hard to fly now with breaking the law FPV can only legally be done in Canada in pairs, with one person as a spotter and the plane or drone must be in sight at all times. Sub 250 grams are popular and can now do almost everything a larger plane or drone can do.

Then there is 4G cell service and nobody can track you using that. Of course the new starlink internet service can turn any large RC plane into a military grade drone with a low latency satellite connection, just like the one Uncle Sam uses to blow people away half way around the world. No one will register that one and you don't even need an RC radio receiver or video transmitter. Unlike a regular RC plane it's very hard to jam too, which is why Uncle Same uses them on drones.

DIY-HP-LED said:
Sub 250 grams are popular and can now do almost everything a larger plane or drone can do.
Click to expand...